What’s the Most Extreme Way You Save Money?

I was thinking today about some of the things I’ve done to save money over the years.  It got me thinking about how far people will go to save money.  After all, frugality has reached what is likely a post great depression high.  This is likely caused by not only recessions and high costs of living, but also from the idealism of conserving, recycling and reusing things to help the environment.

I’m sure you’ve seen one of the many TV shows about extreme couponing, storage auctions, picking, and many other extreme ways to save or make money.  Our question is, what have you done to save money that was extreme?  Here’s what I’ve done:

First of all, we sold one of our cars.  Our family of four now has just one car.  And because we live in a suburb, we definitely still need to use cars.  That saved us a monthly car payment, insurance, and made a lot of extra room in the garage.  Every time I walk out to the garage I don’t miss the awesome car we had (a BMW 335 twin turbo loaded beast), instead, I am grateful that I have saved $30 today (and every day) based on the car payment and insurance that I don’t have to pay this month.  While this may be the mst extreme thing I’ve done to save money, I have done some other things that could make it on the not very extreme list. 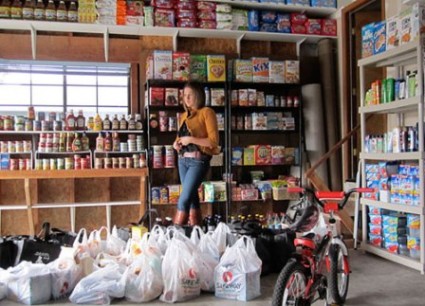 extreme couponing is one way to save

For example, I didn’t go to Mexico last week for my cousin’s wedding.  It pained the heck out of me to sit home while all the fun was taking place, but I easily saved $1,000 by not going.  In the past, when I lived and worked in San Francisco I did a few extreme things.  For starters, I walked to work every day and sold my only car.  Some days I would take the bus but I saved a ton of money by walking and not having to pay for parking at my apartment or at work.

Even more extreme, while in San Francisco I had owned a three unit building that was more or less in the Mexican ghetto that they call the Mission District.  After getting married, my wife and I decided to move into one of the units.  We chose the unit that needed the most work so that we could add some value to the apartment.  However, because of rent control laws and all of the ambulance chasing lawyers in San Francisco, we were sued for a “million dollars” because we “chose” to evict the tenants that we did.  All that after I offered to pay them $10,000 to leave without eviction!  Anyway, the lawsuit was settled for tens of thousands of dollars but I think I made it back with the benefits I gained by fixing up that unit.  Of course, the extreme came over the next few years, when my wife and I had to live in the ghetto.  We literally gave up our nice apartment to have meth addicts on our porch every nite, an insane asylum next door, and a dozen or more day workers every morning that threw ALL of their garbage on our doorway because we evicted their friend.  For all the extreme money saving I did there, I have one thing to say – F— You San Francisco and you’re screwed up laws!

So there you have it, that’s what I’ve done to save money.  Let’s look at what others on the web have said about extreme ways to save money.

What Others Are Saying About Extreme Saving

At Purposely Frugal, they listed the following methods as “too extreme”:

At Love to Know Savings, Amy Hoover disclosed an extreme way to save money that is quite ridiculous.  It’s called “hiding cash” and here is how it works:

Hiding cash may seem like a great idea. People have been known to stuff particular amounts, such as every $5 or $10 bill, in odd places, like plastic bags in toilet tanks, behind framed photos, or under the mattress. While this might work for some, you will be out the cash if your home should burn or be robbed. Additionally, you may truly forget where all the money is when an emergency arises, making it difficult to access.

Another way of hiding cash from yourself is to balance your checkbook using the “round up, round down” technique. For every amount you deposit, you round down to the dollar; for every amount you withdraw, you round up to the next dollar. However, this can become complicated for some people and make it hard to balance at the end of the month. Keep track of this method by using a separate ledger to follow the actual amounts and transfer it into a high-yield saving account at the end of the month.

At Kenndungu’s blog, there are some extreme saving ideas.  One is to remove all of your carpeting, another to move in with mom and dad, and even an idea to stop all spending for a month.  These are some pretty good ideas that I could easily classify as extreme.

You may be scratching your head on this one, but do you realize what it  cost to maintain your carpet? To properly maintain that carpet you have  to vacuum regularly which requires electricity. You also need to have  the carpet steamed, and shampooed a couple of times a year. This isn’t even  taking into consideration the medical costs associated with carpet due  to pet dander, allergens and molds taking up residency in the fibers.  While it may cost a little to get rid of the carpet upfront, it will  save you over $200 a year once you get rid of it.

Tip Two: Move in With Mom and Dad

Regardless of how old you are or if you have a spouse and kids, you may  want to take a look at living with mom and dad again. The reason for  this is that it can significantly save money for both you and your  parents. Yes, you will lose some privacy, but overall it can be a better  arrangement for all involved. Mom and dad get to bond with grandkids,  expenses are shared which could easily save you $3000 a month.

So, we’ve shared our extreme ways of saving money, as well as looked at other bloggers to see what they’ve tried.

Now tell us, what extreme ways have you saved?