Should Americans Save More Money?

The savings rate in the United States is pretty low.  While it used to be well over ten percent twenty years ago, it fell to as low as two percent just before the 2009 recession.

While low interest rates and volatile stock markets may deter some from saving, the real question is whether this lack of savings is going to affect our country years or even decades down the road.  After all, entitlement spending by the government already makes up a majority of the budget, and if savings gets worse, then who is going to pay for people to retire in the future? 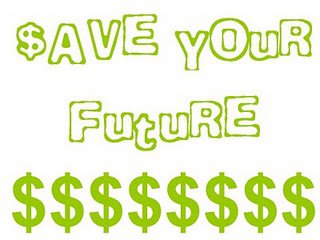 While reading about this subject, I ran across a blog article and have highlighted its thoughts on American savings rates:

It has recently been reported that a majority of American workers (60%) have less than $25,000 in personal savings – including retirement funds. Last summer, a survey by the National Foundation for Credit Counseling found that 64% of Americans don’t even have enough cash on hand to handle a $1,000 emergency expense. Too many are living paycheck to paycheck unable to set aside enough money for savings.

But this isn’t anything new, really.  Saving rates in the U.S. have been steadily declining since the early 1980′s hitting a low point in 2008 (just before the recession hit). And while economists debate the severity of such a clear downward trend, the worry is that it is the result of a growing culture of over-spending that will cause economic insecurity as future generations enter retirement age….

Read more and see the charts that back this up at Does America save enough?

As the article points out, it’s clear that savings rates have declined in the US.  And here is a chart that shows just how the rate has changed over the past few decades. 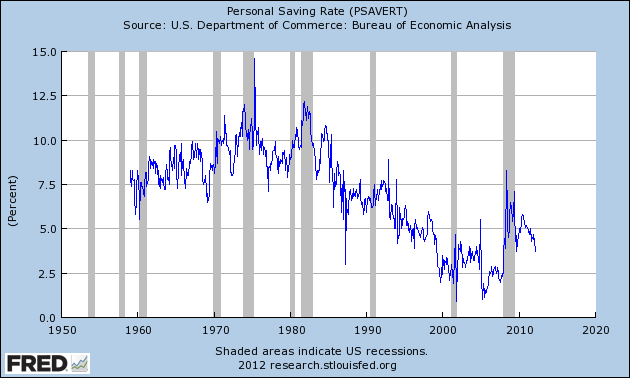 As you can see from the chart, the amount of personal savings from the average US household dropped off dramatically from the 70s and 80s and reached its lowest point in history just before the great recession of 2009.  During the recession, savings climbed as they do in nearly all recessions.

Now that we are “out of a recession” will savings rates continue to climb, or has there been an historic change in how people manage their money?  The bigger question is, if Americans continue to save only a small portion of their earnings, will it have dire consequences down the road.  A few negative effects I can see are:

I don’t know what’s going to happen, but it seems to me that people should be saving more than just 4% of their income each year.  Please let us know your thoughts.

Next post: Save Money on Food and Still Eat Healthy