Besides sex, I’m guessing money is the single biggest sore spot between married couples.  Whether there is one bread winner  or two, it’s nearly impossible for two people to have exactly the same spending and saving habits.  And if both partners in a marriage have completely different money habits, it can make dealing with bank accounts and money very difficult.

We searched around to see how others feel about managing their money and marriage and many had similar thoughts.  Here are the thoughts of someone that learned to set up separate bank accounts for their money management:

As it turns out, my husband and I have completely different spending and saving habits – something we neglected to realize during our long-distance dating relationship. Money become a huge sore spot, and it resulted in shenanigans like me hiding shopping bags, and him tucking away freelance income so I couldn’t get to it.

About three years into our marriage, I changed jobs and started receiving a larger paycheck. My husband opened a separate account for savings, and then it hit us: Why not just have separate checking accounts? As it was, I would spend money out of our joint account, which would stress out my husband. Then, I’d get upset that he wasn’t letting me spend what was essentially my money. So we sat down and divvied up our expenses against how much we’d each be earning, and our nearly six-year love affair with our separate bank accounts began….

Read more of this article at How to Maintain Separate Bank Accounts as a Married Couple. 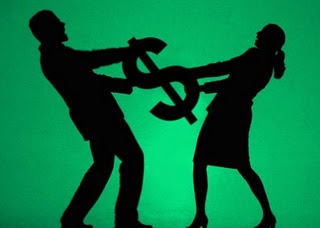 As the article says, separate accounts has made their life much easier.  Use this advice to help you decide the best arrangement for your accounts.  Often, because couples get married later in life these days, they already have their own spending patterns and bank account management techniques. This makes it easier to have separate accounts.  If you are both young when you get married, it may be easier to combine all of your accounts, but you’ll have to work on how to get a system flowing that allows both partners to use and maintain the bank accounts without bothering the other.

In essence, the more alike you and your spouse are, the easier it is to have joint accounts.  The more independent or different you are, the more likely separate accounts will suit you.

There are lots of other options that you can use when setting up your bank accounts.  For example, you could open three accounts, two joint checking accounts and a savings account at a brokerage.  You could deposit a set amount into savings each month, pay the bills and then divide the remaining money between the two accounts.  Or, you could use one account for all of the bills and the other account for his and hers spending.  Or, if there is one bread winner, you could still set up a checking account for the non-bread winner and alot so much money to them.  That way there is no need to discuss small private purchases or to have to see the bills when buying gifts for each other.  That brings us to a big point – private purchases.

I don’t know too many couples that don’t have expenses that they don’t want their spouse to see.  Okay, that was wordy, but what I’m saying is that most people have private purchases that they don’t want others to know about.  Whether they don’t want their spouse to know how much they spent on their hair, or how much they spent at the golf clubhouse, there are always transactions that can be considered private.  Using either separate credit cards or separate bank accounts can help account for this without causing too much irritation.

And our final point, don’t feel like you have to keep doing the things the way you are now.  If something isn’t working out, its free to set up new bank accounts and try something else.  If one of you feels its unfair, then readjust your method and try again.

Next post: Some Advice on Saving Money for Retirement

Previous post: How to Improve Your Credit Through Money Management