Warning: session_start() [function.session-start]: Cannot send session cache limiter - headers already sent (output started at /usr/www/users/csnell/budgetways/wp-content/plugins/byob-thesis-simple-header-widgets/byob-thesis-simple-header-widgets.php:55) in /usr/www/users/csnell/budgetways/wp-content/plugins/easy-contact/econtact.php on line 112
 How to Shop and Save at a Dollar Store

How to Shop and Save at a Dollar Store

Dollar stores can save you money, but only if you buy the right types of products.  That’s because products at dollar stores vary dramatically.  Some products are the same brand name as in other stores, whereas many products are clones or cheap knockoffs that may be priced low but that are not even worth the dollar they cost.

Finding good deals means knowing which items to buy.  Hopefully, reading this guide will help you find some items that will save you money.  And if you have ideas not on this list, make sure you add them in the comment section below.  Here’s my advice.

Things to Buy at a Dollar Store That Save You Money

Gift supplies.  I’ve found that almost any type of gift supply is cheaper at a dollar store.  For example, wrapping paper for a dollar is a good deal.  It is at least three times that at most other stores.  And while the wrapping paper may not be as thick, it’s just going to get torn off anyway.  Gift bags and tissue paper are also much cheaper at dollar stores. 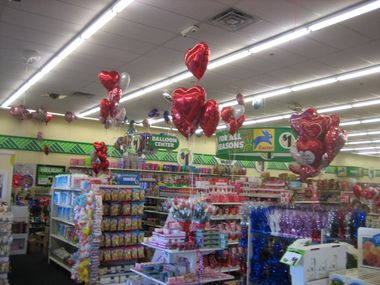 Greeting cards.  Now that most other stores have launched 99 cent cards (like Target), there is some competition for these items.  However, dollar stores still have a much bigger selection of cards for a dollar than stores like Target.  If you don’t go to a dollar store often, stock up on cards by buying several birthday and anniversary cards so that you’ll have them at home and ready to send for the next occassion.

Party supplies.  Streamers and party decorations are a good deal at the dollar store, but the best deal there is the party balloons.  The high quality foil lined helium balloons are only a dollar.  That is a fraction of the cost of other places.  The selection isn’t great but most kids don’t care what the balloon looks like, as much as they just love having them.

Games.  There are many card games such as UNO that are offered for a dollar.   You can also find dice, cards and crossword books that are a good deal.

Beauty supplies.  If you’re not picky about the type of beauty supplies you use, you can find lots of different supplies including lotions, cotton balls, cuticle scissors, pumice stones and gels.

Dining supplies. If you’re just looking for casual diningware then there are some good deals.  You can find decent quality plates, glasses and utensils.  And if you’re looking for inexpensive plasticware sets you can also save some money.

Things to Avoid Buying at a Dollar Store

Anything electric.  I’ve heard that most electric items at dollar stores are not a good deal.  Specifically, I’ve heard that the light strings are so cheap that they often melt.  That sounds dangerous.  And let’s face it, a dollar is not enough to build any type of electronic device.  I’ve also heard that the batteries that they sell are very low quality, don’t last long at all, and are more prone to corrosion.  If you buy batteries, don’t put them in an expensive product.

Food.  While I’ve heard of people getting great deals on food at a dollar store, more often than not the items avaialable there can be found cheaper in a grocery store, especially if you shop the store brands.  You may still find some good deals but don’t assume that they are all good deals.

Toys.  While the toys at dollar stores may be good enough to stuff in a goodie bag for a party you are throwing, they are not good quality.  While my kids always want to buy a toy there, they almost never play with that toy when they get home.  Even the kids can tell how cheap they are.  I wouldn’t recommend buying very many of the toys.

What Others Say About Saving at Dollar Stores

Most others agree that shopping at a dollar store can help your budget and is a good way to save money.  Here is an excerpt from the Fun Times Guide that discusses how they avoid buying the wrong items:

#2 Inferior quality sometimes makes dollar store items not worth it.

For  example, paper plates need to at least be able to  hold a sandwich  without collapsing.  If you can squeeze a roll of  toilet paper flat  with 2 fingers, then you probably shouldn’t buy it.   Kitchen utensils must be stainless steel in order for me to buy them.  Be careful not to buy  anything that will rust.

#3 Closely examine deals that seem too good to be true.

For example, I recently came across  a large bag of brand-name t-shirts at  the dollar store, and threw a  bunch into my cart.  Before purchasing  them, I decided to inspect them more closely and I found that 80% of the shirts had holes in  them.

I also read on another site (can’t remember where to credit them), that most items at dollar stores remain there for a long time.  Their advice was that when you find a good deal at a dollar store, write it down on your dollar store list so that you can remember to save money on that item by buying it at a dollar store in the future.

Do you have any comments about what is and isn’t a good deal at your local dollar store?

Next post: How to Make a Budget for Beginners